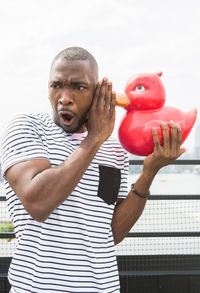 JAY dazzles as an emotionally-torn romantic in Netflix’s upcoming RESORT TO LOVE with Christina Milian. He currently plays recurring roles on ABC’s A MILLION LITTLE THINGS and Fox’s FAMILY GUY.

In 2017, he starred on the Showtime series WHITE FAMOUS as the lead, ‘Floyd Mooney’, that was executive produced by Oscar-winner Jaime Foxx and based on his experiences.

JAY has lent his vocal talents to Sony’s THE MITCHELL’S VS. THE MACHINES with Danny McBride and Maya Rudolph, the Illumination/Universal animated movie SING alongside Matthew McConaughey, Scarlett Johansson and Reese Witherspoon, as well as to the television shows LEGENDS OF CHAMBERLAIN HEIGHTS and BOJACK HORSEMAN.

Additional film credits include the Universal Pictures film ALL MY LIFE, co-starring alongside Harry Shum and Jessica Rothe, Lionsgate/CBS Films comedy GET A JOB opposite Miles Teller and Anna Kendrick, Chris Rock’s film TOP FIVE for Paramount, Universal’s RIDE ALONG opposite Kevin Hart and Ice Cube, the independent film INTRAMURAL and FOX Searchlight’s LOLA VERSUS opposite Greta Gerwig.

JAY is well known for his spot-on impressions on SATURDAY NIGHT LIVE, where he was a cast member for six seasons.